Explore Rossland and Castlegar BC

Explore Rossland and Castlegar BC 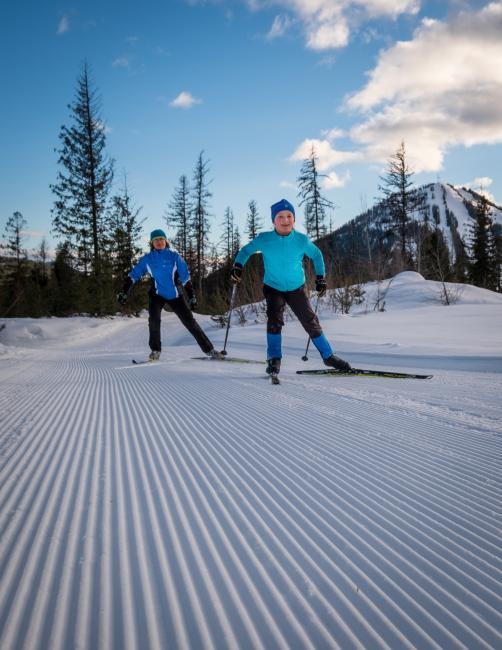 The Alpine Grind in Rossland is an excellent venue to start your day because it’s a community landmark where residents and visitors alike enjoy locally roasted coffee as well as hearty meals such as the popular frittata breakfast bagel. From there it’s an easy five-kilometre drive north along Hwy 3B to the Black Jack Ski Club trails.

Established in 1983, Black Jack ranks as one of the best nordic ski facilities in the region because of its impeccable daily grooming and variety of trails. It’s so good, in fact, that about every sixth Rosslander is a member of the club. There are about 50 kilometres of both classic and skate skiing trails here as well as a biathlon range, three warming huts, a two-kilometre loop specifically for dog owners, and 2.5 kilometres of lit trails for night skiing. Beginners typically do the 5.5-kilometre Gibbard’s Trail, stopping in at the Torresan’s Cabin, and then return on the Roger’s Route to the Rich Thorpe Cabin by the main parking area. Alternatively, they’ll park five kilometres further up Hwy 3B at the northern lot and do the three-kilometre-long Biathlon Loop.

Intermediate and advanced skiers usually park at the main lot and connect a variety of loops such as Ophir, with its steep hill at the half-way point, and the delightfully named Mugwump and Spitzee trails. Once you’ve had your fill of Black Jack, head back to Rossland for lunch at Clancy’s where you’ll be pleasantly surprised by their unique take on fried pickles done in sourdough batter and poutine made with chorizo.

After lunch, return to Hwy 3B and drive the 27 kilometres to Hwy 6, turn west and after a few minutes park on the south side of the highway at the Castlegar Nordic Ski Club trails on the Paulson Pass. There are 45 kilometres of groomed trails for both classic and skate skiers, three warming huts, and a variety of terrain from forested corridors to swaths of open alpine.

The best experience for beginners is a relatively flat loop that’s about seven kilometres long and can be done in either direction. From the main parking area take Bootie’s Trail (which is always the first to have a track put in after a snowfall), stop in at the Ben Shaw warming shelter at the half-way point, and then finish on the Ben Shaw trail. For experts, make your way out to Glenmerry Shelter, enjoying the 200 metres of elevation gain, and then return via the appropriately named Gloryview Trail.

When you’re done for the day, drive the 35 kilometres east to Castlegar and savour aprés drinks at the Tailout Brewery on Columbia Avenue. Or, if you’re hungry, visit the Lion’s Head Smoke and Brew Pub for a down-home meal. Located in the community of Robson, a five-minute drive from the downtown Castlegar, the Lion’s Head has been serving locals since 1986 and today offers a dozen craft beers on tap as well as some of the best smoked ribs in BC.